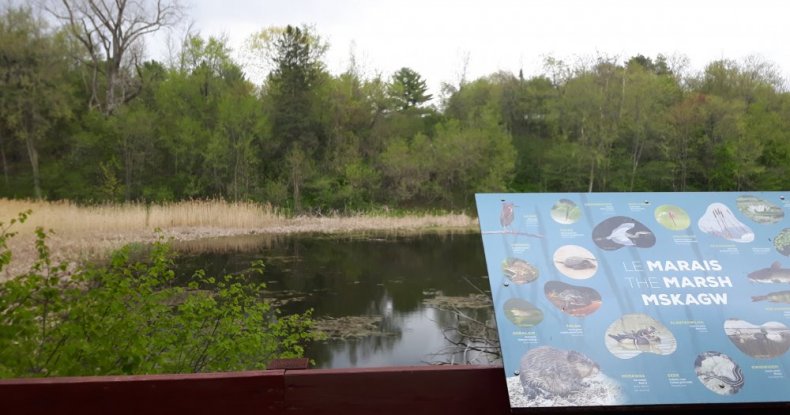 REDISCOVER THE SECRETS OF MOTHER EARTH

The Tolba trail is a place to discover the W8banaki culture in interrelation with the natural environment. Numerous interpretation panels allow you to learn more about the culture as well as the fauna, flora and history of the area.

This trail is in the forest environment bordering the Saint-François River and is accessible to everyone, free of charge, all year long. Its entrance is located at the Abenaki Museum and since the improvement of this trail, it is possible to walk 5 km in a loop that will lead you either through the village or the forest.

It is accessible free of charge at all times and is also open in winter for walking (the trail is flat enough to go without snowshoes). However, we recommend that hikers and snowshoers on the trail avoid being there at sunrise and sunset and that they wear a bib or bright colors in order to respect the hunters who also use this woodland from September to January. There are no hunting blinds directly adjacent to the trail, but it is better to be safe than sorry.


Also, it is important to carry a good insect repellent during the summer months because of the wetlands nearby where biting insects thrive. It is also recommended to bring binoculars to observe the wildlife from a distance.


Strollers: the Koak part (which has a parking lot directly) is adapted for reduced mobility, so strollers are also allowed. Strollers are not prohibited, but the tolba trail, without being a difficult trail, has roots, some non-major level changes, footbridges, not to mention the big staircase if you start at the museum (but you can easily start the trail at the bottom of the hill near the gazebo), so not impossible, but not completely on the flat either.


For parking, the one at the bottom of the hill in front of the river and the gazebo is not accessible in winter, you have to park in the museum parking lot.

The creation of the trail was made possible thanks to the financial support of the Aboriginal Fund on Species at Risk of the Government of Canada, Tourisme Québec and the Fondation Hydro-Québec pour l'environnement. Its extension in 2020 was supported by Canada Economic Development and the Aboriginal Initiatives Fund III of the Secrétariat aux affaires autochtones du Québec.

The Office environment and earth of Odanak is a department of the Council of Abénakis d' Odanak. The office began its activities in 2007 and works mainly on the study and the protection of the species in dangers thanks to the support of Environment Canada and the native Bottom on the Species in Dangers. Since 2007, several inventories were realized on the territory of the community (avian faunae, herpétofaune, floral and other) as well as several arrangements to support these species (arrangement of protection and heavyweight for tortoise, path of interpretation).

In the summer, it is important to bring insect repellent to keep insects at bay.

Interpretive signs are taken off in the winter, but the trail remains accessible to hikers and skiers.